We ignore the real value of money, give in to emotions, and strive for quick gratification.

Have you encountered something similar? Most likely, yes, because these are common cognitive biases.

1. We become victims of the money illusion

We forget that the ability to buy something depends not only on the number in our account but also on price fluctuations. If your salary has been raised, this does not mean that you have become richer. After all, due to inflation, commodity prices have also increased. Therein lies overcoming money illusion: the numerical ability of individuals and the role of emotion. Money illusion.

We do not consider the real value of money.

It seems to us that they always cost the same, but their value is constantly changing. For the same amount at different times, you can buy a different amount of goods.

This phenomenon was first discussed in 1928. Economist Irving Fisher described it as “not understanding that the value of the dollar, or any other currency, goes up and down.” It even affects job satisfaction. In 1997, behavioral psychologists confirmed money Illusion. this is through experimentation.

They described the following situation to the participants: there are two people, they have the same education, position, and starting salary. The difference is how much their salary was raised in their second year of work, and what percentage of inflation is where they live.

Three groups of participants were asked to answer one of the questions: whose position is more economically profitable, which of these people is happier, and whose position is more attractive. In terms of real income, the position of the First is more advantageous. After deducting inflation, his salary is higher than the Seconds. Most responded that way, when asked about economic benefits.

But the question about happiness was answered differently – they said that the second is happier. This is how the money illusion manifests itself. It seems to people that a higher increase means more money, which means more happiness. It also makes us think that the position of the Second is more attractive.

This proves that we can still account for the real value of money when we are reminded of inflation. But under normal conditions, we forget about it and judge money wrong. We think that we have more of them than in reality, and we make rash purchases.

When making financial decisions, try to think rationally. Don’t give in to your emotions. Remind yourself of inflation and the real value of money.

To squander the salary at the beginning of the month, begin to have a budget. Calculate how much you spend on food, utility bills, medicines, entertainment. Plan the rest of your purchases based on the free balance.

2. We are affected by hyperbolic depreciation

Let’s say you were offered to receive 3,000 rubles today or 6,000 in a year. Most would then choose 3,000 at once. We will prefer a reward that is available earlier. Even if it is less than what awaits us later. The future reward is not so important to us. We devalue itA Discounting Framework for Choice With Delayed and Probabilistic Rewards.

But if you put the question a little differently: 3,000 rubles in nine years or 6,000 in 10 – people are more likely to lean towards the second option. When waiting for an award is still long, we think more rationally and choose a larger amount. But making the right choice in the short term is more difficult for us. This explains the credit card debt. Financial stability in the future does not seem to be as valuable as the ability to buy something nice right now.

This cognitive bias affects not only finance but everything related to self-control in general. Dependencies Impulsive and self-control choices in opioid-dependent patients, and non-drug-using control patients: Drug and monetary rewards., food habits, those areas in which you need to give up immediate pleasure sake of future well-being.

For example, you are overweight. You understand that to lose weight. You need to move more and balance your diet. You swear to yourself not to succumb to the temptation for future health. But then you can’t resist the chocolate cake for dessert.

Compared to the immediate enjoyment of the cake, health in the distant future seems less valuable.

Some scientists explain this through evolution—the Evolutionary Foundation of Probability Weighting and Hyperbolic Discounting. When your distant ancestor saw a small skinny antelope, he tried to catch and eat it and not wait for larger prey. Because up to this moment, it was possible not to live. As a result, the brain developed a mechanism short-term reward experience biases inference despite dissociable neural correlates.that encourages immediate gratification.

Protect yourself from temptation ahead of time. In order not to spend on momentary pleasures, set a spending limit on the card. Automate your savings. Report your spending on someone.

Before making a decision, imagine yourself in the future: will the “future you” approve of this choice. This will help you assess the facts more objectively.

3. We are subject to the effect of the denomination

It often happens like this: we are afraid to spend money on a large purchase, but not on many small ones. This is the fault of the effect of denomination, or, in other words, the effect of the value of banknotes. Large bills seem more valuable to USA partitioning explanation of the denomination effect. It is a pity to exchange them. We mentally think of them as “real” money. And bills of lesser denomination and coins are not so valuable for us. It is easy to part with them.

You must have experienced similar feelings while holding a five thousandth banknote in your hands. I don’t want to spend it. But the same amount in banknotes of 1000, 500, and 100 rubles, you mentally refer to the category of daily expenses and quickly spend.

Scientists described this effect in 2009 through a series of experiments, Denomination Effect. In one, they asked people to take a short survey and gave them five dollars as a reward. Someone with one banknote and someone with five denominations of one dollar. After that, participants could go to the store and spend what they received. The researchers then asked to see their receipts. It turned out that the people who received the five-dollar bill mostly abstained from spending.

This effect affects all people, but is especially pronounced in countries where cash is often used.

The researchers described an experiment in China. 20% of Chinese women decided not to spend the 100 yuan bill they received (at the time of the experiment; this was quite a lot). But among those who were given the same amount of money in small bills, only 9.3% refrained from shopping.

Also read: Family Budgeting Mistakes and How to Avoid Them.

The denomination effect has another manifestationPennies-a-Day: The Effect of Temporal Reframing on Transaction Evaluation. A purchase seems more profitable if the price is not indicated in one amount but is distributed by days or months. It is easier for us to pay for the service “10 rubles per day” than “3 650 rubles” per year.

If you want to save money, don’t carry a lot of small money with you. Parting with a large bill is psychologically more difficult, even if we know that we will get change from it. Use this as a waste protection mechanism.

Remind yourself that in the end, the money spent adds up to a large amount. For clarity, keep a financial diary where you will note expenses.

How To Furnish A Terrace On A Budget: Practical Advice 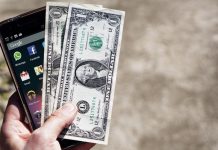 How To Make Money On The Internet While In Quarantine